A Committee for Gender Equality was created at CEREMADE in 2017.

The Committee for Gender Equality is currently composed 16 members, including 7 women et 9 men.

The mission of the Committee is to lead discussions on equality between women and men, and to promote it in the laboratory. It will suggest actions to encourage women to undertake and pursue a leading career in science. The Committee is composed of members of the laboratory, ensuring an adequate representation of PhD students, engineers, CR/MCF and DR/PR and an equal distribution of speaking time between women and men. Among the members, a parity pair is in charge of the co-leadership whose role is to :

The gender statistics of the laboratory

The laboratory statistics are summarized below (in French). 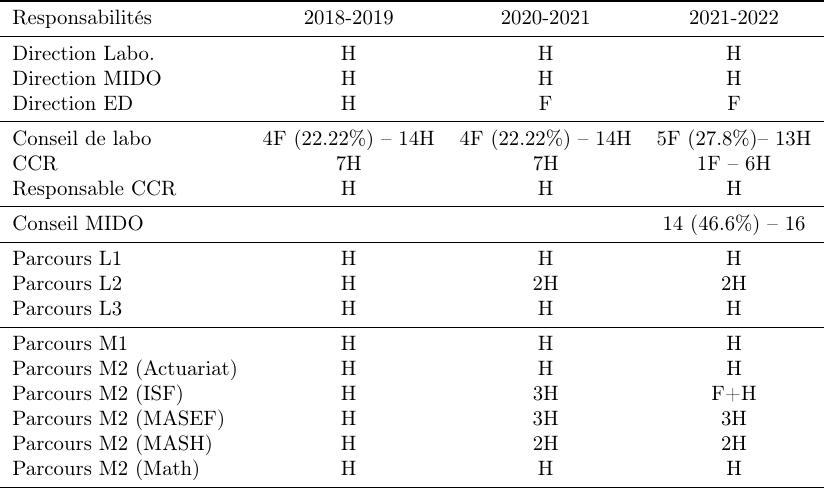 In order to improve equality between people, particularly in terms of gender, the Committee has proposed concrete practices for the laboratory.

The parity committee has proposed a text of good practices, to be read during the selection committees (translated from French).

“We remind that the scientific policy of the laboratory is to give priority to the quality of the file and the theme. In the study of women's files, Ceremade strongly encourages the selection committee to grant 1 year per child; for example, the file of a woman who defended in 2015 and had 2 children is evaluated like that of a man who defended in 2017. The committee members are also reminded that all of us, men and women, are subject to different biases based on gender, ethnicity, disabilities, etc.

Furthermore, the selection committee (through its chairperson) and the laboratory will be informed of the proportion of women and men: candidates, auditioned, ranked.

Ceremade therefore encourages everyone to act with discernment."

This text was adopted by the board and the general assembly of the laboratory.

Management of the CNRS grant

CNRS provides a grant to laboratories that have a Committee for Gender Equality. The question of its use remains unanswered. The avenues that were mentioned during the discussions of the parity committee are

CNRS staff are entitled to 6 days of "leave" to take care of sick children. It seems that this is not the case for teachers/researchers. The parity committee aims to clarify this point.

First an observation: the proportion of women decreases significantly between high school and the end of a scientific career. The laboratory's parity committee has set itself the following objectives

“Mentoring is an interpersonal relationship of support, exchange and learning, in which an experienced person invests his or her acquired wisdom and expertise to foster the development of another person who has skills to acquire and professional goals to achieve (translated from Mentorat Québec, 2016 ; Lafranchise et Cadec, 2014 ; Houde, 2010).”

The Committee proposes to set up mentoring for post-doctoral, ATER and doctoral students. Each student would be assigned a "mentor" among the researchers or teacher-researchers of the laboratory; the goal is to create a relationship of the type described above.

Such a framework is not possible at the M1 and M2 levels due to the number of students. One avenue for reflection is the representation of women in the presentation of career paths during information meetings.

It was proposed to organize a day on the theme "Women in Science" which could include the following points:

As this organization is time consuming, the possibility was raised that the person(s) in charge could benefit from a teaching exemption. This point will be discussed at a later date, particularly with the relevant authorities.

In March 2020, the Committee organized a half-day event for high school girls with the Lycée du Bourget in Saint-Denis. This day brought together a dozen high school girls in the last years of high school. This meeting took place in two parts: first, three teacher-researchers presented their career paths and their research topics, then, after a small snack, there was a "speed-meeting" which allowed groups of 2 or 3 to discuss with an engineer, a researcher or a teacher-researcher in mathematics. This day was a great success!

The Committee's goal is to ensure that women are properly represented in the university's communication. To that end, two items were discussed: